Didion on congee and food for the grieving soul

In honour of our fashion episode for Charlotte Smith’s One Enchanted Evening, we have chosen a quote from style-icon Joan Didion because few people have managed to marry fashion, food and literature so well.

Didion was an author of both literature and cookbooks, and kick-started her writing career on the pages of Vogue and other fashion magazines. She experienced great sadness in her life, losing both her husband and her daughter, the latter dying at just 39 year’s of age. But her connection with fashion and words was the one thing she never lost. Didion was featured recently, at the tender age of 80, as the face for French ready-to-wear and luxury leather brand Celine, wearing her signature enormous sunglasses. The campaign garnered mass international coverage and accolades for featuring a mature, intelligent woman of Didion’s cache. 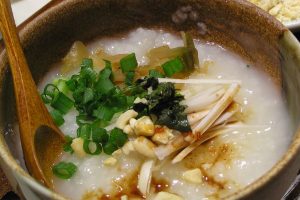 Didion was the perfect pin-up for Celine given her distinctive life-long signature casual dress style of a neat t-shirt or jumper, high waisted cropped jeans, A-line mini skirt, distinctively West coast aesthetic, and of course THE ENORMOUS SUNGLASSES. She was a crush of Hollywood playboy Warren Beatty and many others. But she was also a wife, a mother, a keen cook and woman of many words.

The iconic literary moment we have chosen this week comes from her novel The Year of Thinking Magically, when Didion muses on her grief following her husband’s death and the power of food to heal both body and spirit; to comfort and console.

I will not forget the instinctive wisdom of the friend who, every day for those first few weeks, brought me a quart container of scallion-and-ginger congee from Chinatown. Congee I could eat. Congee was all I could eat.

When I first read this quote many years ago, I had never heard of congee and determined to ferret out some congee that very weekend. I’ve never looked back. Rice is cooked with a choice of herbs and scraps of protein in a delicious chicken broth for as long as it takes to adopt the consistency of porridge. Like porridge or chicken soup, it is heart warming and delicious.

We hope the recipe below will do justice to Didion’s memory of congee.

Bring chicken and 10 cups of water to a boil in a large heavy-bottomed pot. Reduce heat to a light simmer, skimming froth.

Add the wine or sherry, sliced ginger and smashed scallions and cook for 2.5 to 3 hours, or until chicken has disintegrated into the stock.

Remove the chicken and when cool enough to handle strip the meat and refrigerate.

Pour stock through a sieve into a large bowl and discard solids. The recipe requires 8 cups of stock. If you don’t have enough, add water. If there is too much, don’t worry, just cook it a bit longer after you add the rice and it will reduce.

Bring to a boil and stir.

Stir in grated ginger and minced scallions and cook, stirring frequently, until congee is the consistency of porridge.

Add salted fish and extra shallots and ginger and cook for three minutes.

Season and garnish with julienned ginger and shallots.

Put soy sauce in tiny sauce dishes next to each plate and allow diners to add to taste.