Holly Ringland is the author of The Lost Flowers of Alice Hart, a beautiful coming-of-age novel set in Queensland and in Australia’s red heart.

Holly Ringland grew up barefoot and wild in her mother’s tropical garden on the east coast of Australia. Her interest in cultures and stories was sparked by a two-year journey her family took in North America when she was nine years old, living in a camper van and travelling from one national park to another. In her twenties, Holly worked for four years in a remote Indigenous community in the central Australian desert. Moving to England in 2009, Holly obtained her MA in Creative Writing from the University of Manchester. Her essays and short fiction have been published in various anthologies and literary journals. She now lives between the UK and Australia. To any question ever asked of Holly about growing up, writing has always been the answer.

Tell us a little about your book. What inspired you to write it? What was your most joyous moment and your most difficult challenge? 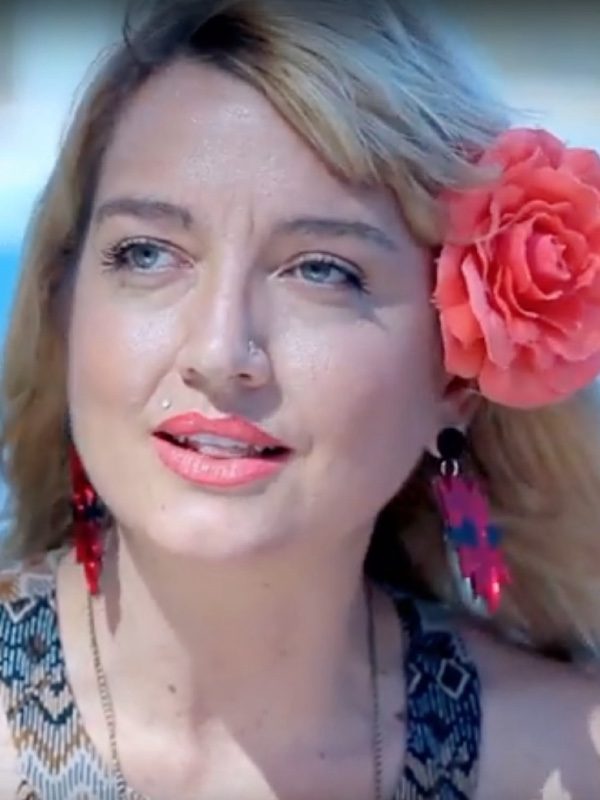 The Lost Flowers of Alice Hart is the story of what happens to a young girl after violence forces her to leave her seaside home and go to live with family she’s never met on a native flower farm, where she learns to speak in flowers, and take agency of her story.

The genesis of this novel was trauma. I’ve lived with male perpetrated violence for a lot of my life, which silenced my voice, courage and the dream of being a writer I’ve had since I was a child.

In 2012, I started researching the relationship between traumatic experience and the process of writing fiction. It was through this research that I discovered Tom Spanbauer’s concept of ‘dangerous writing’, which is the idea of going into the sore place we all have inside of us, and writing from there; using fiction as the lie that tells the truth. I realised that I’d never written from the sore place. If anything, I’d written around it, aside it, in spite of it. Never from it.

So, my research became my own call to arms, but threw up all kinds of questions for me. What would become of me and my life if I wrote the thing I was most scared to write? What story would emerge, and how might it live in other people’s hearts, if it ever saw the light of day? What else can trauma be made into, other than unrememberable memories? These kinds of questions are why I wrote The Lost Flowers of Alice Hart.

My most difficult challenge was sticking with it, continuing to show up at my desk every day through the more harrowing parts of the story in the novel and the more taxing personal memories that came up as I was writing.

The most joyous moment was sending the first draft off to my agents and realising by doing so I’d achieved a dream I’d had since I was three. I’d written a novel. I clicked send in Manchester while I was on Face Time with my best friend in Melbourne, who has cheered me on every step of the way for the last fifteen years. I could say we were the picture of composure but I think everyone would know I’d be lying.

Are you working on anything new? Tell us about it.

After only finishing the final edits to Lost Flowers in January, I’m now enjoying reading for pleasure again, and letting my mind wander and daydream with whispers of the next story that has been calling to my heart, inspired by my Danish ancestors, 19th century women fairytale writers, and women with tattoos.

Does food and cooking feature much in your book?

I knew off the top of my head that there were at least half a dozen scenes where food was prominent in bringing characters together in Lost Flowers. So I went through the book to double check. And in doing so I’ve realised something I don’t feel like I consciously was aware of before! PANCAKES!

Pancakes are a theme for Alice right from when she is a child living at home. She dreams of them at nine years old when she goes into the kitchen to realise her mother has left the house. Later, June makes pancakes on Alice’s 10th birthday, and again on the morning she gets her licence when she’s 17.

They are the meal that symbolise comfort, unity and togetherness to Alice even when the dynamics of family are not good. Pancakes are what Alice cooks herself in a highway motel when she’s 26, alone, and has fled Thornfield after June’s devastating betrayal. Pancakes are also what Alice makes for her and Dylan, most tellingly on the day when Dylan first reveals his troubled nature to her and she soothes him.

Do you love cooking? What are your favourite family recipes?

I LOVE COOKING. What makes cooking challenging and interesting for me is that I’m allergic to gluten, and in the last couple of years have medically been required to stop eating dairy and meat. This leaves me with seafood, eggs, veggies, fruit, nuts, pulses and grains. And boy, do I go to town to find ways to eat the types of food I love, without eating the food I love.

For example, my favourite type of food is Mexican, and luckily, corn is naturally gluten free. When I make a gluten free and vegan Mexcian feast at home, I cook with black beans and fresh coriander, I make guacamole from scratch, use fresh corn, quinoa and sometimes tofu. The result is a variety of tacos with lots of crunchy juicy salad and thick, creamy guac. I’ve made and served Mexican feasts to all manner of glutinous meat eaters, to wide grins and happy rubbed bellies, much to my delight.

Tell us a story about yourself that revolves around food.

I was 19 when I first learned that I shouldn’t eat gluten. Strangely, although having such a limitation in my diet has often been a pain, over the years it’s also often been the main reason I’ve experienced places and met people I wouldn’t have otherwise gone to or come across. When I’m travelling to a new city for example, one of the first things I’ll do is search for gluten free restaurants and as a result will discover parts of a city I might not have otherwise found. Ten years ago it wasn’t so easy. But now, gluten free is quite a staple. Which still makes me cheer with joy.

When I was a child though, I loved and ate EVERYTHING. My grandmother was the queen of cooking comfort food. Her scones. With butter and honey. Oh dear god, I would fall to my knees and beg for them the minute we arrived to visit her when I was young. They were always oddly shaped, and crunchy on the outside and moist in the middle. We nicknamed them ‘rocks’. Her secret ingredient was cheese. Of course. What doesn’tcheese make better?

My mother was a wonderful cook. When I was 9, my parents and three-year-old brother lived on the road in North America for two years, most of the time in a camper van. Breakfasts were usually cereal and milk, easy to serve on the go. But the super special times were pancake mornings. I have a vivid memory of being in Devil’s Tower National Park, Wyoming, setting out our things for cereal and milk. It was cold and my fingers were numb. Mum whipped out our camp table in the sunshine and help up her cast iron fry pan. I was thinking pancakes, she said. Eating those fluffy, syrup-soaked, buttery stacks of deliciousness sitting in the sun with Devil’s Tower looming over us is something that has stayed with me. I’ve desperately loved pancakes ever since.

OH MY GOD I AM HAVING FULL ON REVELATIONS ABOUT PANCAKES AND MY BRAIN BECAUSE OF THIS QUESTIONNAIRE!

Also, buckwheat pancakes are gluten free! And can be made without any dairy. AND eaten as sweet or savoury meals – for example they are divine with any of the normal sweet pancake toppings, or equally served with a poached egg, some smoked salmon, lemon juice, and avocado. Maybe buckwheat pancakes would be perfect for us to cook together on Word of Mouth?

Do you have a favourite poem or book excerpt featuring food that you would be happy to read aloud?

On her third night on the road, sweat still trickling down her backbone after sunset, Alice spotted a neon sign flashing on the outskirts of a mining town. She pulled into the motel parking lot and paid extra for an air-conditioned room with a kitchenette. In a convenience shop nearby she found pancake mix. Alice bought a box along with a stick of butter and tin of golden syrup and fried them up before she’d even taken off her boots. Lying sprawled in her knickers across the oral polyester bedspread, Alice tore the pancakes into strips, slathered them with butter and syrup, and ate the stack while the rattling wall unit belted out stale, cold air. The lullaby of twenty-four-hour movies on the cable television sent her into another empty sleep.

Alice’s desert life centred around Dylan. If they were both off for sunset, they took to walking the re trails with Pip; Alice filled her pockets with wild flowers to press in her notebook, while Dylan took photos of her in the melting red light. When she was on night patrol and finished late, she drove straight to his house and often found him waiting with dinner, or a hot bubble bath. On those nights, he and Pip sat by the bath, leaning against the wall, while he read aloud to her. If they had a whole day off together they gardened in the sun until they were distracted by each other’s warmed bare skin; she’d mentioned working in her mother’s veggie garden as a child, and came home from work one day to find he’d made her a bed of dark earth sown through the red dirt. At night, they snuggled on the couch with the heater blazing, the television on the one regional channel with decent reception, watching BBC dramas and antique shows. On rare occasions when the winter sky was cloudy and the day didn’t yield any sun, they stayed in bed. Those days became synonymous with pancakes; Alice would fry up a tower, which they’d take back to bed and devour.

What is your favourite cookbook? Why?

Smulltronställe – a Swedish word – literal meaning: ‘place of wild strawberries’. A discovered space special to you, treasured and returned to for solace and relaxation; a personal idyll free from stress. The word ‘Smultronställe’ has been used since the early 20th century to describe a place that you like to come back to and that is not easy for others to find.

Mukuringanyi – a Pitjantjatjara word – meaning: to want, to desire, to love.

A few years ago I was walking down the street in Amsterdam one morning, and rolled my ankle over the edge of a gutter, breaking my foot. Six weeks in plaster followed, which resulted in being mostly housebound. I’m normally a runner and practice yoga near-to-daily, so the confinement was mentally very challenging. Until I discovered making the desserts from TRVL. This one in particular, the strawberry chocolate tart, was a game changer. I baked, I made, and I noticed my state of mind strengthen and improve. This little tart has had pride of place in my heart since.

Granny’s scones aka rocks. Slathered in salted butter. With yellow box honey. And a cup of tea.